Her story begins on August 27, 1927 when Emily Murphy was preparing to welcome visitors to an afternoon tea at her home in Edmonton. Emily had hosted many such teas in the past but this one would be very different. It would in effect change the course of history.

All the women she had invited had already been very active in women’s and human rights in Canada and especially in the Temperance Movement prior to that meeting. All lived in Alberta although not one of them was born there. Three were born in Ontario, one in Quebec and one came from Britain via India and Ireland. Henrietta Edwards was the eldest and Nellie McClung the youngest and all five women were married with children.

The five women were also devout Christians, accomplished public speakers, feminists, activists and social reformers, but it was Emily Murphy who was the real “driving force in the campaign to have women recognized as “persons” under the terms of British North America (BNA) Act and thereby be granted the right to be appointed to the Senate,” and she knew that these particular women were the ones who could achieve that. Because of Emily Murphy’s strong leadership some historians have referred to the women as “The Famous One plus Four.”

But perhaps the most famous of the five was Nellie McClung because of her many books, but Smith has probed deeply into all the lives of these remarkable women and their many achievements over the years. Their tea with Emily Murphy in August of 1927 was the beginning of their joint fight for justice for women everywhere in the eyes of the law and to allow women to be viewed as “persons” under the law.

On that day Murphy requested the other four women to sign a letter to the Governor General in which she had included a copy of Section 60 of the Supreme Court Act of Canada. Prior to that time, the Senate had always ignored women’s requests to be admitted to the Senate of Canada. This latest letter would eventually change things but as Nellie McClung is quoted later as saying:

It has been a long task; it has been an epic story, this rise of women. They had to begin from far down. Women had first to convince the world that they had souls and then that they had minds, and then it came along to this political entity…. And the end is not yet.

All of the stories are fascinating and Smith has done an excellent job of recounting them to her readers. The women’s many deeds and achievements are documented in a very readable fashion.

Smith’s book also includes an excellent timeline from 1834 to 1965 when the last of the famous five (Irene Parlby) died.

Included also are additional Notes on each chapter plus Bibliographical Essays and References on each of the women, three of whom were authors with Nellie McClung being the most prolific.

Some of McClung’s last books were written from her home (Lantern Lane) in the Gordon Head area of Victoria on Feltham Avenue. In Victoria she is honoured in the name of a nearby library and her house is now a heritage site. An excellent Bibliography for further reading rounds out the book.

Today there are still many reminders left of these incredible women. Statues of them stand in Ottawa, Edmonton and on the grounds of the Manitoba Legislature in Winnipeg.

Barbara Smith is the author of over thirty books, most of which are ghost stories inspired by true events (including one here reviewed by Caileigh Broatch — ed). She was also featured on the Discovery Channel’s Hunt for the Mad Trapper.

Born and raised in Toronto, Smith has lived most of her life in Edmonton before settling on Vancouver Island in 2006. This book is one of a collection of Amazing Stories published by Heritage House and is well worth reading. 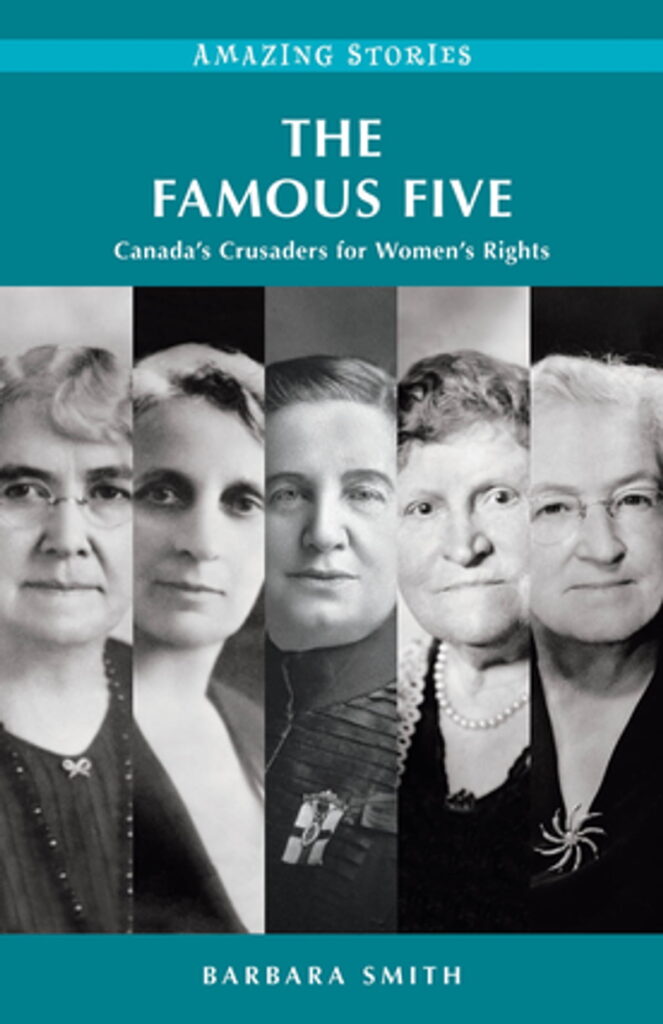