The Call of the Red-Winged Blackbird: Essays on the Common and Extraordinary 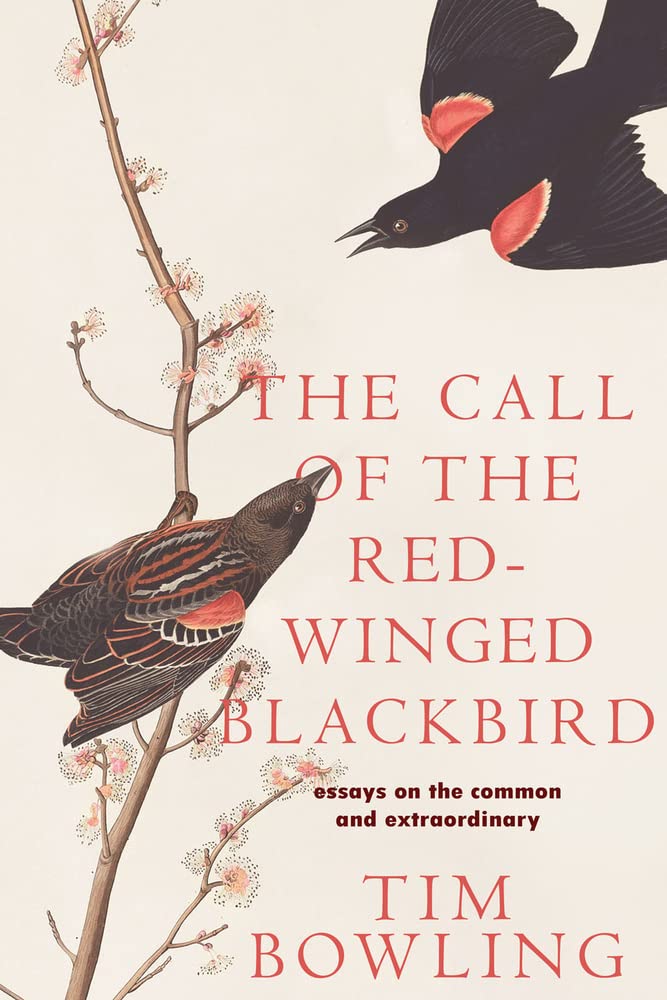 It is always a delightful surprise to discover a book you would not normally read, only to find it extremely enjoyable. Such was the case for me with Tim Bowling’s collection of essays on life’s observations in his book The Call of the Red-Winged Blackbird.

In Part One of the book, Bowling explores a number of situations about “the common and extraordinary” from memories in his own life that left a lasting impression. These meanderings of a man heading towards sixty and “the final quarter of life” are most enjoyable and very insightful.

His stories range from his admiration for Buster Keaton, a silent film hero he thinks about whenever he sees a railway and recalls the 1965 film The Railroader, to his initiation into skating on frozen lakes with his much older brother, to thinking about coins and currency, and to how handwriting is a thing of the past, as he recalls the days when he learnt cursive writing in school.

His ponderings continue by asking himself the question “Should I really read The Remains of the Day in what remains of my days?” as he discusses other authors and their literary works. From there, Bowling’s essays tell of his own literary success as he grew older and the importance of privacy of love letters between the sender and the recipient.

The last two essays in Part One tell of his life as a young boy growing up in a fishing family along the Fraser River. His essay entitled “The Floating Library” begins, “My family was poor but we didn’t live in poverty. My father made a subsistence living from the commercial salmon fishery at the mouth of the Fraser River, and my mother sometimes clerked in the five-and-dime store when the domestic budget required a boost.” As a fishing family they learnt how to budget well in the hard times.

The author’s parents were older when they had him—his mother was forty and his father also in his forties. Twenty years earlier they had had his older siblings, so Tim coming so late in life became somewhat spoilt. His oldest brother seemed more of a father figure to him, while his actual father seemed more grandfatherly. Nonetheless, he felt deeply loved by them all.

The final essay in Part One embraces the title he chose for his book and embodies memories of his mother who always imitated the call of the red-winged blackbird when she called him for supper while be played outside under the cherry blossom trees on their street.

I sensed a theme running through all these essays—the need to escape today’s digitalized world and go in search of a solitary and more silent existence.

Part Two begins with a meandering, somewhat ghostly story of a memory Tim Bowling had from his childhood when he accompanied his father and a doctor down the Fraser River waterway one very dark night to a silt island where a hermit lived.

The hermit was Alf Hartley, a man who had lived in isolation for over thirty years. Hartley was now dying and the doctor and the author’s father must decide what to do. Should he be transported to hospital or spend his last hours in the place he had called home for so long? It was a gruesome experience for a twelve-year old boy.

This memory haunts Bowling in his senior years and he decides in the next part of the book to explore the reasons why people seek isolation. This section of the book became a little over-analytical for me and I fear Bowling’s readers will perhaps be disturbed by his words as he describes his journey of discovery, taking solace from the moon, heading off for midnight walks in below zero temperatures in Edmonton, where he now lives, and visiting a curative Float House to “experience nothing” while floating in a heated bath of Epsom Salts. Nonetheless, his writing is beautiful and very poignant, so readers will no doubt take away their own impressions from these moving passages.

Bowling becomes obsessed with the moon and recalls as a child watching Neil Armstrong, Buzz Aldrin, and Michael Collins land on the moon in July 1969. He then writes of those three men, especially Armstrong, analyzing their thoughts and their lives after having been alone where no man had been before. In addition he examines the lives of other hermits and thinks about why Defoe wrote Robinson Crusoe.

This theme of isolation continues until Bowling finally decides he must re-visit the hermit’s silt island to see if he can discover why Alf Hartley chose that place and that lifestyle to spend his days. He goes armed with Robinson Crusoe, which he intends to read while on the island.

He is initially disillusioned when he arrives in Ladner, where his family once lived. The myriad of changes are substantial from what he remembers. He initially discusses his reasons for travelling to Alf Hartley’s island with his older brother and his mother, wondering if whatever the doctor and his father (who had already passed away) did on that night long ago might well have been an assisted death, long before such a thing could have been legal. However, he finds no definitive answers from his family, so he continues on to the silt island in the hope of finding a clue there for himself. Rather than spoil the ending of the book, I will leave this discovery to the reader.

But I had found no prescription for anyone’s illness but my own, if illness it was. Nor did I even know what I was curing. For a few terrible moments, the surface of the river was tender as skin, as I broke it with the oars. Then the water, as our consciousness must do, repaired itself and prepared again to flow out to the sea.

Throughout his book, Bowling describes himself as an atheist, but from what I took away from these stories, I see him more as an agnostic, mourning the more recent loss of his mother. Technically an atheist does not believe in a God, while an agnostic does not believe it is possible to know for sure that a God exists — or if such a thing is even knowable. This seems more like Bowling’s beliefs as he explores and questions the meaning of life throughout his ramblings. It is well worth reading his Afterword which, in my opinion, confirms this.

Author Tim Bowling initially worked in the fishing industry with his father and brother. Later he became the author of twenty-one works of poetry, fiction and non-fiction. He is the recipient of many honours including two Governor General’s Award nominations and a Guggenheim Fellowship.