Between a Rock and a Hard Place:
A Dutch Policeman Fighting the Nazi Occupation 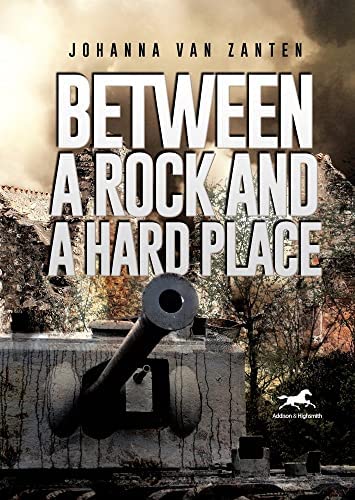 I always enjoy books set in World War Two, especially those that tell stories of lesser known aspects of the war. Such is the case with author Johanna Van Zanten’s book Between a Rock and a Hard Place which tells a story set in Nazi-occupied Netherlands from 1940 until 1945.

Jacob Van Noorden is the new Dutch Police chief in the village of Overdam near the border with Germany and, over the next five years, he is faced with a multitude of problems as he tries to work at keeping law during his country’s occupation while, at the same time, hating the situation of having to be subservient to the enemy and not being overtly part of any resistance which could harm his job and his family. He is indeed placed between “a rock and a hard place” in this new reality, which was an excellent choice of title.

To compound Jacob’s problems further, his wife Margaret is German-born although she became a Dutch citizen when she married Jacob. They have two young boys, Hendrik and Jaap, with a third child on the way, and Margaret’s German mother who lives nearby is pro-Nazi and has always strongly approved of Hitler’s plans for a new world.

I was pleased that the author created short chapters in her story, which enabled me to frequently go back and forth to double-check on names as the book progressed. Names of the characters and their positions became confusing as many were very similar.

The book has a slow start, but it is well worth persevering through the early chapters as the story is based on the author’s own family during the war, and on the national crisis caused by the German occupation. At the end of the book, Van Zanten explains how she has changed some of the settings and the names of characters in the name of literary licence.

The character of Jacob Van Noorden (based on the author’s own father) begins on the day the Nazis invade their village and Jacob is disgusted with his country’s complete capitulation to Nazi rule:

The German troops had passed through Overdam — and many other towns — reaching the centre of the nation within two hours. It had been a walk-in. The humiliation of the army had been complete — his [Jacob’s] army. It was simply too much to bear.

I soon found it easy to become involved in Jacob’s dilemma. His character is strong, portraying an honest man who was placed in an impossible situation. His wife Margaret’s character is equally convincing. As husband and wife they must keep secrets from one another as the war progresses; he to protect her from the realities of his job, and she from her dislike of what he has to do and what she is doing behind the scenes to help the Resistance, despite her mother’s pro-Nazi views.

There is also the undercurrent of what is happening to the Jews of the Netherlands, including Margaret’s own friend Ruth, whose husband is mysteriously sent away. Jews are being arrested on a daily basis and Margaret thinks that Jacob, as a Dutch policeman, should not condone this. Even though he does not agree with the Nazi policy, in order to keep his job and to protect his family, he does nothing other than refuse to arrest Jews himself. He is conflicted with the orders he receives, not only from his own police commander but also from the Nazi regime.

There are many other strong characters in Johanna Van Zanten’s book, especially that of Henk Zondervan, Jacob’s brother-in-law, who is part of the Resistance. Charles Nauwaard, a Nazi warden who appears to befriend Jacob throughout the war, is another thought-provoking character.

Jacob’s own problems did not end with liberation and when the war finally ended. He was then criticized for the way he had handled his position and was even accused of collaborating with the enemy and the Dutch Nazis. Although this was completely untrue, he felt humiliated by the citizens of Overdam.

The charge against him was eventually dismissed and he was given another position as Police Chief away from Overdam and sent to another city, Delden. He lived and raised his growing family there for the rest of his life. But things were still not completely resolved by the time he died many years later.

The author’s father and mother did not talk about the war to their children and it was his daughter, Johanna, who decided to write their story after her vigilant research in archives in The Hague where she found what happened. She has now brought this important story to light in her book; a book that examines the truth of those years and completely clears her father’s name in any involvement with the enemy.

Although I found the book confusing in parts, making for a slow and meticulous read, it is well worth reading to the end. These are the war stories that should not be forgotten.

Johanna Van Zanten immigrated to Canada from the Netherlands in 1982, where she continued her job as a social worker. She discovered her gift for writing later in life and now, in retirement, enjoys writing while dividing her time living between Canada and Mexico.