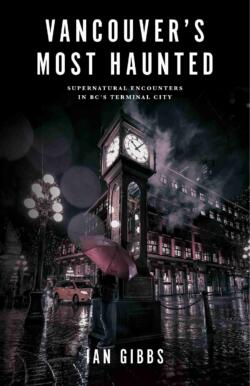 Ian Gibbs, who has spent years collecting and sharing ghost stories as a Ghostly Walk tour guide in Victoria, British Columbia, has done another impressive job in his second book Vancouver’s Most Haunted: Supernatural Encounters in BC’s Terminal City. This time he describes more ghostly tales about the city of Vancouver. You will be intrigued by these stories— even if you are not a believer in the supernatural.

The author’s new collection of hauntings includes Vancouver’s spookiest tales that are set in theatres, heritage houses, hospitals, railway stations, restaurants and even shopping centres, to name but a few. As Gibbs states, it is from the layers of history in large cities like Vancouver that traces are obviously left behind of what happened there before, including the people who lived and died there.

In his introduction, Ian Gibbs states that “ghosts (generally) do what they want. They appear in different ways, and sometimes they can only be perceived through specific senses…. I’ve learned that most ghosts just want connection – to be heard, to be acknowledged…. Ghosts are not there to scare us.”

But, quite naturally, those who do encounter ghosts in some form or another are frightened because they don’t understand what is happening. And certainly the tales the author has collected together in his book are hair-raising and pose many questions to the reader. “Is this possible? Is it real?” Gibbs adds a caveat at the beginning of his book by stating: “To all who have experienced the unexplained, this book is for you.”

In other words, he is not forcing his readers to believe in the paranormal. He is simply stating facts from people who have indeed experienced strange unexplained things and then allowing you to make your own decision.

I personally found most of these stories spine-tingling even though I admit to being disappointed that many of the so-called “sightings” are merely “feelings” or “senses” of a strange, unnatural presence nearby. Few people actually see a full-blown ghost — only a vague apparition or a shadow.

It is hard to choose just one from these thirty tales that stands out from the others but a few certainly have a particular poignancy — for instance the Riverview Hospital story in Gibbs’ collection of hospital hauntings. Once called an “insane asylum” or a place for the mentally disturbed, Riverview is perhaps obviously a place that would still have traces of those who suffered mentally in life but are now free in death to return and haunt the place where they were treated.

There is also the strange haunting of Susan Jones who died in 1965 in a car crash. The story of her sightings by people on that same road where the crash occurred, were so horrific and painful that they had a most profound effect on her entire family, especially her younger sister who later became a nun.

Some of these stories of hauntings have scared people so much causing them to sell a home, move from an apartment or leave a job. If a private home, for instance, has been lived in by one family for many years, after they all died their traces are often left behind and they want to make sure that new owners respect the house they still consider theirs.

These “ghosts” often become angry if things are changed and not to their liking. Things in the house will be moved with no explanation. I particularly enjoy those ghost stories where the ghost appears to be having fun with the living.

Ian Gibbs has certainly done an incredible job collecting these ghostly tails in Vancouver just as he did in the story of sightings in Victoria in his first book, Victoria’s Most Haunted: Ghost Stories from BC’s Historic Capital City (TouchWood Editions, 2017 — reviewed here by Peter Grant — ed).

My own take on Vancouver’s Most Haunted, which is written in a delightful conversational manner, is that we should not judge what we don’t understand. Anything is possible unless proved otherwise.

“It is not my intention to influence anyone’s beliefs,” states Gibbs, “instead, my hope is that these stories will inspire, thrill, delight, and comfort.”

He has definitely achieved his objective, but if you do believe any of these stories, please don’t read this book late at night before going to bed!!! You might have trouble falling asleep!