The Rooming House: The West Coast in the Seventies
by Michael Kluckner

Michael Kluckner has skillfully managed to capture the free spirit, free love era of the late sixties and early seventies in this captivating story of lost youth trying to find their paths in life.

During those turbulent decades, many young people were travelling aimlessly across Canada, the United States and Europe searching for a purpose. These young folk were part of a unique generation and in this book their stories are told through those who come and go in a rooming house in Vancouver and in the rural communities of British Columbia.

The backdrop to their stories are world events such as the Vietnam war — with draft dodgers coming into Canada across the border; Woodstock — with their love of music, free sex and drugs; and a growing environmental movement — with a strong need to vent their pent-up anger by protesting.

The Rooming House tells the individual stories of several of these young people through the diaries of two of them — Mary and Justin. An unusual feature of this book is that the diary entries are played out to a soundtrack of the music of that era and with black-and-white illustrations of the characters involved. This element of storytelling works well and makes for an enjoyable read. As you digest their stories, you find yourself humming the music of Joni Mitchell, the Beatles, the Rolling Stones, or Bob Dylan, Elvis Presley, the Beach Boys, Simon and Garfunkel, Crosby, Stills and Nash, and Leonard Cohen. A complete playlist of these performers and their unforgettable music is included at the back of the book as an added bonus.

The book also includes Notes explaining some of the events and places mentioned in the book, which is helpful to the reader.

The first diary entry, which is Mary’s, begins in July of 1971. She has just arrived in Vancouver on a bus from Toronto having left behind her long-time boyfriend, James, who was destroying his life with drugs. She is now determined to start a new life in Kitsilano (Kits) with a view of “the beautiful bay and mountains” and a location that looks like an interesting place to first find accommodation and then explore.

“The street scene reminds me of Yorkville with the usual cast of characters, whiffs of pot and hip talk,” she writes. As she scans a bulletin board for a place to stay, she begins talking to another woman who informs her that Kits has a housing shortage right now, but offers to take her to a restaurant called The Naam which also has a bulletin board listing accommodation. Once again, there was nothing available under $150 a month which was far more than Mary could afford, so the woman (Alison) offers to take her to her own basement suite which she shares with her guy (Nick) and where Mary can sleep on their couch until she finds something. “It’s pretty gloomy even on a bright summer day,” Alison tells her.

In fact the basement suite is in an old, flour-storied rooming house and Mary soon fits into the scene in the building with all the other cast of characters. She learns that Nick writes for the Georgia Straight, an underground newspaper, and Alison is an artist who pens pictures of everyone in black and white ink.

Other occupants of the house include a psychology professor they name “Dr. Freud” who shares the suite above the basement currently with his student girlfriend, and in the attic a pot dealer named Derek who comes and goes at regular intervals. There is one other empty suite which Alison tells Mary might soon be available. Meanwhile Mary finds that even their couch “feels like heaven” after riding on a bus across Canada.

Mary becomes part of this strange group of people even forming a brief relationship with Derek the pot dealer and is able to forget her boyfriend back in Toronto. She enjoys the atmosphere of free living and being her own person and finds herself confiding in her friends Alison and Nick about her past life.

Friends come and go, drifting pointlessly through life. Nothing seems permanent and this includes their sexual relationships. At a rally, which turns into a riot, Mary briefly talks to a boy called Justin who seems nice but she then loses track of him in the crowd.

At this point in the story, Justin’s diary entries are intertwined with Mary’s, so I found myself having to backtrack occasionally to confirm who was “talking.” It might have helped the reader to include their names over the entries.

A girl named Amy enters the story, first as a girl-friend of Dr. Freud and then later she becomes a friend of Mary’s. Amy also has a brief relationship with Justin which takes her to Maplewood where a group of naked hippie sun-worshippers live in a commune. They drink “Kool-Aid spiked with acid” and lose consciousness. Amy decides to leave, refusing to commit to Justin by using the familiar line “see you around” that all the young people use.

Amy re-appears in Vancouver and returns to the rooming house where she becomes a room-mate with Mary in the empty suite. Mary feels they might become friends, not knowing about her brief relationship with Justin, the boy she herself had found attractive at the rally. Did he feel the same attraction, she wonders?

But this is the 1970s where nothing lasts forever. This is the era of protests and riots, of police galloping through the streets brandishing riot sticks, of people like Nick leading the rallies with words like “Legalize Dope! Legalize Dope!”

Many of this lost generation are university students trying to decide if they want to travel or return to university for another semester the following year, and the author takes us along on their journeys in that chaotic world that includes hitch-hiking to a commune in the Kootenays, looking for temporary jobs or simply finding ways to survive from day to day.

The centre theme of the story is the rooming house they drift in and out of and where their lives include sex, drugs, pain, sadness, unwanted pregnancies, despair, transcendental meditation and tragedy.

Is there a happy ending? The reader is left to discover this after Mary makes her final diary entry — a letter to her mother after she returns from meditation in India — and we are left with just ten more illustrated pages that tell the rest of the story without text. Another unique way to end a story.

Michael Kluckner has written and illustrated many books including Here and Gone, Toshiko, Julia, and 2050. In The Rooming House he has done an excellent job of capturing an era to perfection. 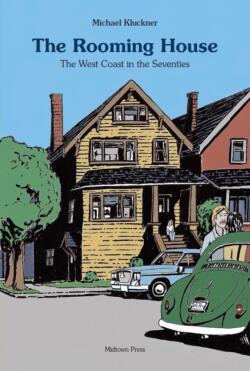